Humour:
"All processes must be executable," says the IT guy. "Aren't all processes working? Is there any process that doesn't work," the puzzled business manager asked.


Most of us would have no problem to grasp the concept of a "business process". However when used in conjunction with terms like "process model", "process instance" or even the word "process" itself, the conversation often get very muddy. Without giving any context, these terms are at times confusing especially where conversation is held between practitioners from different knowledge domains (perspectives). This paper illustrates the meaning of the terms when used in different perspectives and how they relate to each other.

There are many perspectives to business process and the definitions of terminologies used are not consistent across the different perspective. I will not dwell into every perspectives in this paper but focused on two of the most common ones:

In this knowledge domain where the focus is not on automation, most of the time the key outputs depend on presentation of the findings and recommendations. Hence a focus on the process documentation. The main artefact of this perspective is the "process definition" that is used to describe "process".

In short, the term "process" here refers to the actual runtime of activities not the description of the activities.

Think of a physical book and a pdf file of the same book. Although the pdf file does not fit the characteristic of a book, it does have the contents of a book and also commonly referred to as a book today.


There is another key difference between the use of process and workflow within the process automation perspective. The term "process" is used to describe either IT system process or human activities or even combination of both. Whereas under the "workflow" approach, there are two types of workflows - IT system work flow and human workflow. Again the reason is the underlying technologies used different.

So, where does Process/Workflow Pattern sit?

According to psychological study, our brain is trained to recognize patterns or even tempting to create one when there isn't one to something we are familiar. Having said that, the term "process pattern" or "workflow pattern" is used in general to describe collection of flow patterns of activities.

Under the process automation perspective, a process pattern can be applied to one or more "process model" or "process".  Again, when two "process models" or "processes" have the same process pattern, it does not mean the two "process" are the same process. This could caught up in another debate where the way IT likes to treat patterns in a specific way and confused with the concept of "reuse". But that is for another day ...

The aim of this article is to join the two perspectives into a combined one. Figure 5 diagram illustrates how the terms relate to each other. 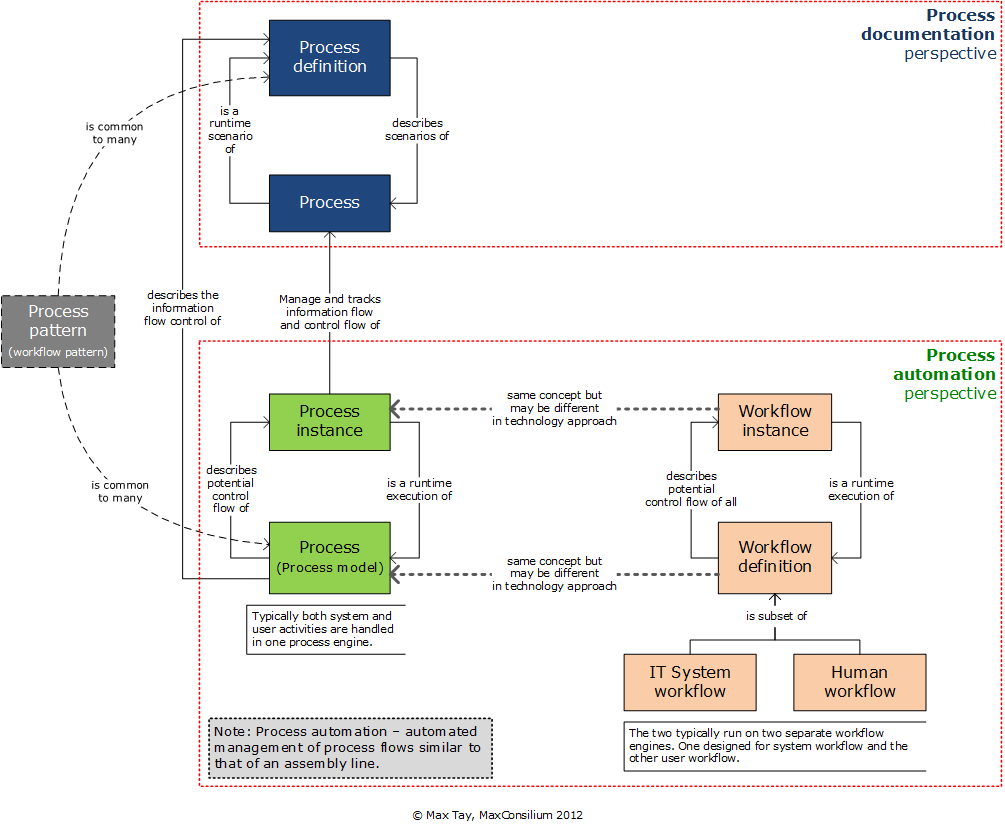 All these terminologies look simple in our day-to-day common language but it could get nasty when moving into the different knowledge domains. Without context and agreed definition, a simple term could potentially causing heated arguments. Try to understand the perspective of the other side. Put the context in place to avoid unnecessary arguments. Make sure you reach an agreed list of definitions.

Next time when someone mentions the word "process", clarify whether he/she is referring to an actual running process or a process model.